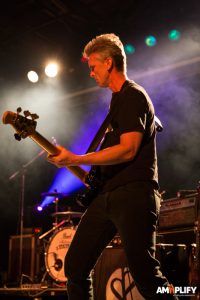 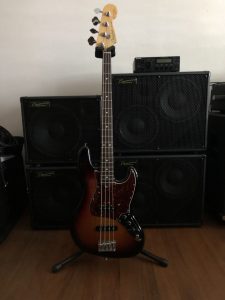 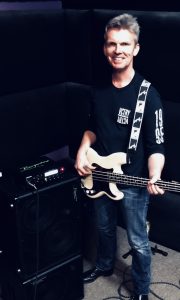 Bergantino Artist Adrian Leppard is a very interesting bass player from Sydney Australia who I learned about from a great review he posted on our Facebook page. “Ampeg, Fender, Markbass, Aguilar, all make great gear, but since I have been using Bergantino the rest are all in the rear view mirror. The B-Amp/HD210/HD112 combination is a thing of beauty. Clean highs, tight bottom end and great with pedals. The Berg cabs also make my Aguilar heads sound great, it’s all good.”

From back packing around the world to ending up in one of his favorite places Australia Adrian shared his story on how he started playing bass with us.

“I started playing bass at the age of 14 when all my friends started playing guitar. Living in the West Country of England we played at school concerts, local halls and gradually further afield. Starting out with a cheap Japanese P-Bass copy, I then bought and sold a few basses over the next few years, including an Ibanez Studio ST-924, Ibanez Roadstar, Steinberger copy and a Jaydee Mark King. Amplification started with a 60’s Vox AC30 at my first gig (I knew it was a guitar amp but it sounded better than cheap little bass amps) and then another guitar amp with a Marshall 2098 JMP lead head (not much bass gear around my small town) with a homemade single 15” bass bin, before settling on a Peavey TNT130 Combo which I used to run with a Marshall 2×12 guitar combo (early attempt at getting top/bottom end combination and worked surprisingly well). By that time I was living in London and playing around pubs and clubs.”

“In 1986 I went back-packing around the world which started a 29 year absence from bass playing. In 1994 I emigrated to Australia, sold all my gear and to be honest didn’t really think about bass playing.”

“In 2015 my bass playing started again by chance with a conversation on Facebook. I kicked off with a Squier Classic Vibe 70’s bass and a Fender Rumble combo. I was back rehearsing again with a heavy rock band, playing a set that was not significantly different from a set I had played aged 15 some 36 years earlier! And that was when I started the search for ‘quality gear’ with my new found middle-aged ‘wealth’ – moving through Markbass and Ampeg before settling on Aguilar. Then in 2017 I was looking for a 410 to pair with my Aguilar DB751 and came across reviews for Bergantino and the HD410 and as luck would have it someone in Tasmania was selling a pair of HD210’s. After one rehearsal I was hooked. The power, the clarity, the tonal values were what I had been looking for. Quickly followed by a pair of HD112s and then a B-Amp I now have a highly flexible rig set up with my personal favorite being a HD210/112 combination which gets lots of love from fellow musicians when I play live. In the last few years I have played with a variety of different bands and styles – Rock, Goth, Soul, Blues, they all sound great with my Bergantino gear, whether I am using my Jazz, Precision or Stingray.”

“And of course there is then the great support from George at Bass Gear Direct in Sydney and Holly, Jim and the team in the USA.”

“Thanks Bergantino for helping to continue to make this musical journey a very happy one.”

Adrian has a very diverse list of influencers including Stanley Clarke and Bernard Edwards to Steve Harris of Iron Maiden and Flea of RHCP.  His playing style is now exclusively finger style although in early years he did us a pick. Favorite styles of music to play consist of old-school Stax soul or anything with a good groove.

“Nothing is worth more than this day” (Goethe)

The one song he loves to play the most is the last one that he learned. J

Many Thanks Adrian for your time here and for sharing your story with us!