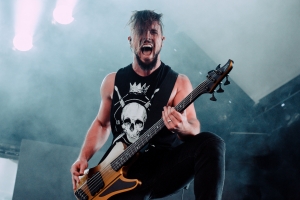 A Los Angeles native, Matthew has been working as a professional touring and session musician for over a decade. Whether with vintage pop artists like LP or modern hard rock acts like Diamante, crafting a sound that’s right for the song is always his number one priority.  Lee Presgrave sat down with a busy Matt Denis recently at NAMM 2020 to get a small part of his story.  Enjoy.

So Matt, what have you been up to?

I’ve been writing for the new Diamante record, studio work for other clients, and getting prepped to tour over the summer, mostly.

Oh, and eating. I love food.

Where are you from?

I’m a Los Angeles native actually, which is a little rare; most people who live in this city are transplants.

I grew up in the San Pedro area and it was pretty cool to come up playing gigs at some of the same venues I saw my favorite bands at back in high school.

Tell us how you started on bass guitar?

I started “singing” for a punk rock band in high school and eventually started recording our songs (and our friend’s bands) on one of those old red four track Fostex boxes: we’re talking no computers, no click-track, no punching in, all recorded live direct to those old giant SD cards.

I really had no idea what I was doing, the internet was still in it’s infancy and I hadn’t even heard of Pro Tools yet; sometimes I was really successful at capturing what it sounded like in the room and sometimes not so much.

It was a lot of fun though, so I went off to college with the intention of studying recording recording engineering. I also played a little guitar at that point, it was a Washburn acoustic, mostly to contribute to writing songs for my band and to flirt with girls.

The college I attended (SDSU) happened to have one of the best party scenes in the entire country. When I realized the amount of general education courses I’d still have to sit through before I finally got to study what I wanted, I realized I was at a crossroads.

So, while I was technically still “enrolled” in school, I ended up digging into the social scene, buying my first bass, joining another band and spending most of my time in my room learning to play by listening to CD’s instead of actually attending classes.

After about a year of that, I dropped out and moved back to LA to seriously pursue music as a career.

Describe your playing style(s), tone, strengths and/or areas that can be improved on the bass.

My style is focused on groove and tone first and foremost; the most important thing is always to make the song sound and feel good.

Even if you’re playing the perfect part, the wrong sound can totally ruin the vibe and the reverse is obviously true as well: the right bass and the right amp/signal chain makes all the difference.

I’ve always viewed the bass as the glue that connects the rhythm to the harmony/melody, and since our notes have so much sonic energy it’s really important to be listening even more than we’re playing. That said, the reason I gravitated toward bass, to begin with was how much melody it was capable of adding to an arrangement; my ears are always open for those possibilities.

My tone varies pretty widely depending on what I’m playing, but for rock stuff I love big, grinding, in-your-face kind of tones: overdrive/distortion/fuzz of some kind is pretty much mandatory.

Sometimes that kind of sound even crosses over well into the pop realm; a bass line like “Shut Up and Dance” is a great example of that.

As a player my strengths are probably the aforementioned things, a knack for finding the right parts and sound for the song regardless of the style, as well the ability to learn a lot of material very quickly.

My mom loves to tell this story about bringing me into work when I was two and the shock of one of her bosses when he saw me reading out loud to myself. I wasn’t actually reading, I had just memorized all of the words on every page so I knew exactly when to turn them.

Weaknesses would be sight-reading (my chops used to be decent years ago but I never really use them anymore) and jazz-level improvisation: jamming with friends is always a good time, but I’d get buried sitting in with some real jazz cats.

There will still be people talking about how Leo Fender got it right the first time with a P bass and chastising other players for using a pick, as well as new players, luthiers and amp builders doing things with the instrument that would have been inconceivable 5, 10 and 20 years prior.

As the digital world of music production continues to grow, there is always the possibility that bass will be entirely replaced by sampling, but after spending three months straight on the road with Breaking Benjamin, Chevelle & Three Days Grace last year performing for over 500,000 rabid rock fans I have a strong suspicion that there will always be a demand for live music.

People hate this question but:  If you were constructing your personal Bass Mt. Rushmore, who are the four players that would make the cut and why?

They probably hate it because it’s a borderline impossible question; we’re influenced by every single thing we’ve ever listened to, and trying to distill a lifetime of music down to four players is a pretty tough ask.

That said, Karl Alvarez (The Descendents) and Matt Freeman (Operation Ivy/Rancid) were two of the main reasons I started playing in the first place, so they’d have to make the list.

As far as players I’d most like to emulate as a working session musician, I’d probably have to say Pino Palladino and Justin Meldal-Johnson. Their parts and tones are always perfect and they’ve had some gigs that I’d absolutely love to do.

Then there are guys like Mikey Shoes (Queens of the Stone Age) and Jeremy Pritchard (Everything Everything) who have really melodic takes on modern bass playing, with unique tones to boot, that are both incredibly inspiring.

See?! Picking just four is impossible, I could easily go on for a few more paragraphs.

Matt, we’ve known each other awhile now. How many basses do you think we’ve sold to each other?

Our wives would probably be horrified.

I love to read, travel, train, eat, and hang out with my wife and cats.

I also just started getting back into photography. I loved it back in high school, but that was back in the day of real film and darkrooms.

This is a whole new world.

So, why did you choose Bergantino gear?

I’ve never played through an amp that impressed me as much as the forté HP does, and I’ve used all of the big names and most of the classics: everything about the design is incredibly musical and intuitive, and every engineer who has heard it was incredulous that there aren’t any tubes in it.

The headroom is incredible, it’s remarkably versatile and the fact that one of the best fuzz circuits I’ve ever heard for bass is built right into the amp, and updated circuit designs can be loaded in seconds via USB on the front panel, is icing on the cake.

Bergantino is currently making the best bass amplifiers on the market.

Let us know what you’re currently working on (studio, tour, side projects, etc.).

Writing for the new Diamante record and getting ready to tour with her this summer, we have some great festival dates lined up (Rocklahoma, Rebel Rock & Louder Than Life) and are booking a tour around those.

Finishing up recording for a modern hard rock album with an old friend that’s some of my favorite material I’ve ever worked on as well, so I’m pretty excited about that. I’m not sure we’ll ever tour, but creating music with other musicians just for the love is its own reward.

I’m also working on some online collaborations with some great musicians around the country to show off some of the gear we all love, you can expect to see some of those really soon.

See you on the road!