Artists page
You are here: Home1 / Artists page2 / Artist Spotlight3 / Bergantino Audio Systems is proud to welcome Jeff Matz to our family of... 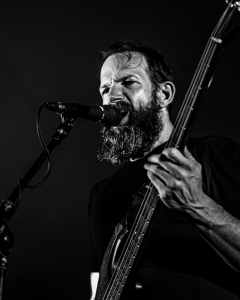 Jeff Matz is proof there is still a place for nice guys in rock and roll. Don’t let his easy-going demeanor fool you, inside his body is a steady-state of simmering riffs and grooves just dying to get out. Jeff has been in the music industry for quite some time and we were lucky enough to virtually sit down with him, ask a few questions and hear what he and the band have been up to lately. Please enjoy!

Thanks for sitting down with us, Jeff. What have you been up to lately?

I just returned home from playing some East Coast shows with High On Fire. We played New York and Boston. It was so great to return to those cities. With HOF, we have been focusing our efforts on writing a new album with our new drummer Coady Willis; it is coming along nicely. As far as upcoming HOF shows, we are about to play 3 nights in Chicago, then we have a short West Coast run around New Year’s Eve and a European tour planned for June-July 2022.

In addition to High On Fire, I have also joined Mutoid Man, which I’m very excited about! They have been one of my favorite bands for years, so it’s a blast to perform those songs live with them and writing new music with Steve and Ben has been amazing. I’m also working on another exciting project, which I can’t talk about just yet, as well as preparing an album of solo material–lots of irons in the fire at the moment!

Can you explain how you guys write those incredible High On Fire riffs? Most know Matt is also in the doom metal band Sleep, and both bands are very different. Do you have to record a song or an album with a particular mindset?

It’s not difficult at all. Sleep and High On Fire are such different animals and they operate completely independent of one another. When High On Fire does slow, heavy material, it naturally ends up sounding much different from Sleep. Most of the time we don’t have a preconception of what our new material should sound like. It typically comes about and evolves pretty organically.

“King of Days” has such a great bass melody in the intro and outro. How was that song born?

How are you and your band dealing with this last year, and what does your future look like?

We’ve all had to figure out new ways to get by since we weren’t able to tour. I started teaching private bass students via Skype and Zoom, which I still continue to do. It’s been a really great experience. I’ve met so many cool people through teaching, and it’s pushed me to expand my knowledge of music and continue to improve as a player. During the whole lockdown, we continued to work on music for a new HOF album. Now we’re finally back to playing shows again. It felt strange at first, getting on stage again after so much time off. But now it feels somewhat “normal” again. I’m so grateful to be performing live again. I missed it so much.

You have a monstrous bass tone. What led you to incorporate large amounts of drive in your tone?

I’ve spent a lot of time playing bass in three-piece bands, and the desire to fill up sonic space is what led me to incorporate distortion pedals, and later adding guitar stacks to my bass rig.

What other instruments do you play?

I’m a bassist first and foremost, but I also play a lot of guitar. I write a lot of High On Fire’s riffs on guitar. The last few years I’ve also been studying Turkish folk music on the traditional Turkish lute, the bağlama or saz. İt’s an amazing sounding instrument and Turkish folk music is so rich. The melodies and rhythms are beautiful and at the same time very heavy sounding to my ears. I think it blends very well with heavy music. I also play the tanbour, another type of lute from Iran, which I played on a couple tracks on Death Is This Communion, the first album I recorded with High On Fire. I’m also working on becoming a better keyboard player, and I have also been singing a lot more these days.

Tell us about your signature bass with Dunable and how that came to be.

I’ve known Sacha Dunable for quite a few years. His band Intronaut toured with High On Fire back in 2007. I saw Intronaut play at the Road to Burn festival in Holland in 2013 and was admiring the other guitarist David’s unique looking guitar. I asked him about it, and he told me that Sacha built it for him. He encouraged me to talk to Sacha about having him build me a bass. Sacha and I discussed it, which eventually led to him building the first Dunable bass for me in 2014. We have been working together ever since. He approached me about doing a signature series around 2017. We collaborated on the body shape and specs, and this current signature bass is the fourth iteration of the JM series. We refined the body shape a bit more, and it’s also the first Dunable custom shop instrument to feature a gloss finish. It has a precision style pickup in the classic p bass spot and a relatively hot single coil in the bridge position. I’m really happy with how this run of basses turned out. I just finished doing some recording with it, and it sounds amazing.

What led you to check out Bergantino gear?

I was attracted to Bergantino cabinets after seeing/hearing my friend Aaron Rieseberg from the band Yob play through a Bergantino 215 and a 610. It sounded so clear and punchy, but organic. I was very impressed by the sound and the volume of air being moved. That’s what led me to reach out to the company. Now, owning some of the gear, I can say that the NXT212’s are some of the best sounding cabinets I’ve tried, and Forte HP is great sounding head with an insane amount of power on tap. All the Bergantino gear is meticulously engineered–top quality stuff!

About Bergantino Audio Systems: Bergantino Audio Systems has been dedicated to developing and building the highest quality audio products and bass guitar amplification systems since 2001. Founder Jim Bergantino has worked in a number of fields in his career – from hi-tech electrical engineering to high-end hi-fi and the professional audio world. After designing custom bass cabinets for many other leading brands, he went out on his own to start Bergantino Audio Systems. We have received numerous accolades within the musical instrument industry and continue to look forward with our designs and our unique approach to developing products. https://bergantino.com/

The always impressive Claudio Rocha loves his B|Amp. He writes: “I love...