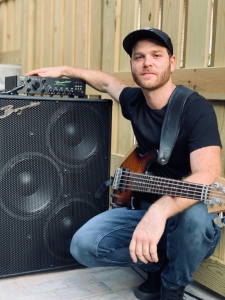 Born in New Jersey and now living in Boulder, Colorado, Fred Reisen holds down the low end for the up and coming live house/techno band, Dynohunter. Their music is a one of a kind take on the live electronic genre. They blend their live instrumentation with house and techno-studio productions creating a vibe of tribal, deep yet spontaneous dance music.

Reisen said playing the bass in Dynohunter requires a style and tone that is “driving, deep and groovy” all the while keeping the dance floor moving for the entirety of their sets.

His other musical endeavors include playing bass for The Jaden Carlson Band, backing up the 18-year-old phenom Jaden in her project, which fuses  jam, funk and jazz stylings.

For all his bass rig needs, Fred has found a home with Bergantino Audio Systems. His current set up includes the forté HP and HG412.

Fred grew up in a very musical family and took to the family tradition at a young age.

“My dad plays guitar, my brother plays guitar, my mom plays piano, all my cousins play a variety of instruments and my grandfather, Clarence, was a jazz piano player who regularly sat in with touring bands coming through our town.

“I guess even going as far back as my great- great uncle, Irving, he was a piano player, too. Truth be known, I got relegated to the bass. First, my older brother, Will, played the guitar, so there was that.

“The real kicker, however, was when my dad showed my best friend, Trevor, and I how to play the intro to “Stairway to Heaven” on the guitar on the same day when we were both about 8 years old. Long story short, a week later Trevor came back able to play that and the entire rest of the song and I realized I would probably be a bass player.

“We went on to play together all throughout our younger years and he was a monster of a young musician.”

Fred continues, “My dad (Henry) is an excellent acoustic guitar player and has been for about 50 years. He is a true fingerpicker in the vein of Robert Johnson or Taj Mahal. Whenever I am home, I try and get a little jam in with my dad and brother. We get to break out my dad’s vintage Martin and Gibson guitars and that is a treat.

“My mother (Jan), who is probably my biggest fan, also plays the piano but her big influence on me was that she was always listening to great music, especially for a young bass player. Music. Such as the likes of Steely Dan, Earth Wind and Fire, and Paul Simon. All in all, though my older brother, Will, is probably the most my important musical influence of the family members. He is somewhat of a music historian and has, over the years, introduced me to more great bands, songs and historical musical anecdotes than anyone ever will!”

Fred had other influences when he was a youngster, as well.

“I also want to mention my childhood babysitter, Tara Goodman, and her husband, Chris Gannon. They lived with my family while I was growing up. Tara is an amazing singer and was the frontwoman for a soul/funk/rock band that she and Chris (who played bass) started a band called The Believers. They always practiced with their bands at my house growing up and I just loved it. Some serious osmosis was going on there.

“Chris also gave me drum lessons when I was a little kid … and because he wanted someone to jam with when the band wasn’t around. It was an amazing start. They had so much fun with it! Seeing them do this was an inspiration for me.”

Some of Fred’s initial, wide-ranging influences were players like Flea, “P Nut” from 311, and Matt Freeman of Rancid. As he grew out of his punk rock roots, bass players from the jam band world, such as Mike Gordon of Phish and Otiel Burbridge of Aquarian Rescue Unit/ The Allman Brother, which gave him his first taste of the world of improvising and jamming.

Besides the obvious innovators like Jaco, James Jameson and Victor Wooten, he now he lists greats such as Anthony Jackson, Chuck Rainey, WIllie Weeks, Stuart Zender, Paul Turner, Garrett Sayers, Kelsey Gonzales, Hubert Eaves and many more as players he is currently emulates and transcribes.

“I look at music and bass as a lifelong journey. I didn’t grow up taking lessons nor was I in a formal atmosphere. I had some great musical influencers along the way that gave me a real healthy outlook on what it means to be a musician and a bass player, and what to keep in the forefront of your mind, so you don’t get bogged down.

“I learned most of this from two amazing drummer friends, Jeff Korba and Justin Ehmer. They have since passed on but I will never forget invaluable lessons. Their encouragement and influence make me feel like I have a purpose in music to carry out their ethos and spirit.

“On a lighter note, I did take a handful of lessons with crazy British guy named Steve Karmen. He did a bunch of touring in the 1970s and was a total wild man! I learned more about the rock star attitude of music than how to play my instrument from him. He looked like he was straight out of “Spinal Tap” with that pseudo-mullet and everything.

“At my first lesson I showed up with this old knock-off Rickenbacker and he would not let me come into the lesson studio with it, it weighed half as much as I did! He convinced my dad to get me my first piece of nice equipment that changed everything. It was a fender jazz bass for basically half-price at this music store because someone had paid for part of it and never came back for it. The few lessons I took from him ended when my dad came in and found Steve handing me a beer at the young age of 14!”

Shortly after graduating from Colorado University, Fred joined his primary project, Dynohunter.  Fred reminisces about his first connections with the band:

“Clark, the saxophone player, started Dynohunter by producing music in his dorm room and he is still the engine that makes it go. At this point, seven years in, we have all have had to sacrifice and we have taken this group very seriously to grow beyond just being a local band. We have continually pushed ourselves to make this band as unique and impactful as we possibly can.

“We are making dance music, but want our music to have a deep resonance with the people. That connection and impact is what we strive for as we carve out our own niche in the world of house and techno.

“When we write, we always have the live show in mind. We often envision how each song will fit into a set and setting  … and which of emotions it will we bring out. Although Clark has written a lot of the music over the years, we all try and collaborate on a lot of the songs as well and I truly think our best music is yet to come”

In the live realm, the music of Dynohunter makes people move and feel something.

“When we hear stuff like, ‘You guys took us on a journey,’ or “I feel like I just experienced sound bath therapy.’ ” that’s when I know Nic, Clark and I are doing it right up there.

“We always perform the best we can and give one hundred percent on stage all the time. When opportunity calls, we seize them and always do our best. Our philosophy is that we can’t afford to have an ‘off’ show and that you must have your best foot forward all the time!”

Fred Reisen, on why he chose Bergantino gear

“I have had the pleasure of playing out of some great, world class sounding gear but for me it was never perfect. In my most recent rig, the cabs were heavy (over 150 lbs. combined), and the head was either too big and fragile or not quite highly powered enough.

“One night I bumped into a buddy of mine, Bergantino Artist Dan Africano, and we were discussing how his low end needs while playing bass for reggae giants John Brown’s Body, and mine, were very similar.

“We both needed something with super clean and deep lows while retaining great punch and clarity. As most bass players know that is not always an easy task.

“Dan shared his experiences with me about his Bergantino Audio Systems gear. I went to his house and had the chance to play through some of his gear. As soon as I started to play through the Bergantino gear, I realized how much thought had gone into making the gear. It was what I considered the best gear I have ever played out of and by a long shot.

“What Jim has engineered and built into his gear is exactly what a real gigging bass player is looking for. My Bergantino set up (forté HP and HG412) is simultaneously a plug and play beauty and a tone-tinkerer’s dream. You can either set it and forget it or tweak knobs until you find heaven in a bass tone.

The forté HP and its 1200 watts provide a dreamy amount of head room and the HG412 has handled everything I have thrown at it, and it sounds great on large and small stages alike.

Ultimately, Bergantino Audio Systems achieves what I thought was impossible: extremely high-quality bass tones in a lightweight, compact and durable package with the versatility to match any style while being both easy to use and intuitive yet highly customizable and able to dial in your perfect tone.”

Fred, we are happy to have you on board and look forward to many more years of listening to your creativity through music.  We’re honored you chose us to help you along your journey.