Imagine Dragons “Benjamin Arthur McKee is an American musician, songwriter, and record producer. He is humble, funny, calm, cool, and also just happens to be the bassist for the rock band Imagine Dragons. The Bergantino Audio Family had the opportunity to meet Ben and ask him a few questions before his concert at the TD Garden in Boston. McKee and his superstar Grammy Award Winning band mates are a brigade force to be reckoned with as they sing and dance across the universe on their worldwide whirlwind Evolve tour. Ben arrived to the interview with a huge smile and relaxed demeanor. One would never know that he would be performing in front of 20,000 fans in a matter of a few hours. …” 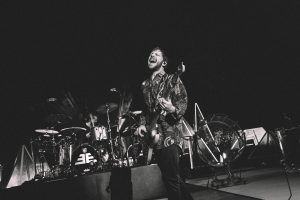