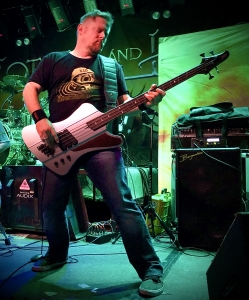 With quick wit, high energy and a ‘Nawlins’ drawl, Rob Norton can normally be found commanding the low end in his band, SpaceMetal. We sat down with Rob recently to get some of his thoughts on tone, personal bass heroes and gear, among other things.

LP: When did you start playing bass?

RN: I started on guitar and wasn’t that great (laughs). Then, when I was 18 and a senior in high school, I got a call from a guitar player friend who was way, way, way better than me. He said he was forming another band, and would I like to play bass? I didn’t have a bass, but he did, so he showed me all the songs. I thought he just meant for me to play bass for a rehearsal, but he said, “No, I want you to play bass for good,” so that’s how it all started. From that point on, I never went back. I sold all my guitars and that was that.

LP: What drew you to bass? Did anything in your past make you bond with the instrument?

RN: When I was a teenager, my favorite band was Rush. Another favorite of mine was Iron Maiden. They were probably two of the most up-front bass bands of the time, so I think, kind of subliminally, I was drawn to the bass because I loved those two bands so much, but I hadn’t really thought about playing because I bought a guitar first, like so many other people. With the opportunity to be in a band, I was like, “Well, yeah, I’ll play bass.” I was just happy to be in the band and to be playing with musicians of a higher level.

LP: Who is on your Mount Rushmore of bass players?

RN: OK, so this is my personal Mount Rushmore and not who I think is the best?

RN: I’m going to go with the four that had the biggest impact on the way I play. First off, Bob Daisley. Then I’m going to say Eddie Jackson followed by Eric Avery and Doug Pinnick.

I remember the first time I heard Janes Addiction, and I was like, “Oh, I don’t even think I understand this but it’s amazing!”

Eddie Jackson of Queensryche had more impact on my tone than any bassist. I already really liked the band early on, but Operation Mindcrime was a tonal revelation to me with that classic Spector sound and growl with some dirt added to the tone. Up to that point, I always wanted the cleanest bass sound possible. I’m still not sure I’ve heard recorded bass tone I liked better than Queensryche’s “Mindcrime” and “Empire.” Plus, he was such a tasteful player who stood out in that 80s era tonally and with a slightly more up front or equal role to the guitars in many ways. Take one listen to a track like “I Don’t Believe in Love.” My current tone with SpaceMetal is so similar, even though the music is very different.

LP: Do you write any music on bass?

RN: I have. In the past, I’ve come into rehearsal with a riff or a cool line that evolved into a melody. In SpaceMetal, I haven’t written as much. We have a main songwriter in the band and the other guitar player comes in with riffs so, if anything, it’s been less writing for me and more arrangement. Our main songwriter is not blocking anyone out. He’s all for ideas, but my main strength lies in how I put things together in a collaborative environment.

LP: How would you describe your tone?

RN: Well, you know it goes back to the challenges of lower tuning. We tune to C standard. The minute we decided to tune to that, it changed every single piece of gear I had because it wasn’t up to the task. I hadn’t really used much distortion until then, and one of the key things besides going to basses with a longer scale like the Spector’s or Dingwall’s, I started using overdrive and distortion. This REALLY helped because it helped make a difference on where I could cut through and find my sonic place with two guitars tuned to C. Also, I’m a low-mid guy over a high-mid guy. I want the thunderous push without that sub-octave, lower muddiness. It’s a balance between the bass, technique, your strings, the amp and finding that balance. I feel like now, I’ve finally figured it out.

LP: Why did you choose Bergantino gear?

RN: A long time ago, I played through an HT322 and was floored…it was the most amazing thing I’d ever heard! After that, I knew it was a brand I had to check out. During that time, I was going through other gear left and right…all the new Neo cabinets, heads, and tons of distortion pedals. I must’ve easily tried 35-40 different types of distortion pedals before finally settling with one. At first, I bought the HDN212 and HDN112 and loved the fact that I could stack them with such a small stage footprint. Also, that cabinet setup allowed me to easily compete with two metal guitarists playing half stacks! The B|Amp has always intrigued me because of its power and functionality. I loved the fact that I could save each of my sounds to memory presets. The B|Amp is like the perfect hybrid amp between all the modelers out there and a down and dirty bass amp. I can leave all my pedals at home now for the gig—everything I need is inside that little box! I love the fact that Jim is always working on the next great design, so I’m excited for the future and proud to represent Bergantino wherever I go.

We are so pleased to have Rob on board with Bergantino and look forward to hearing many more tracks from his band. He and SpaceMetal can be found here: