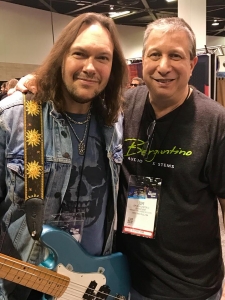 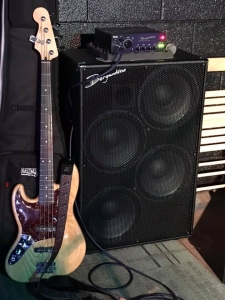 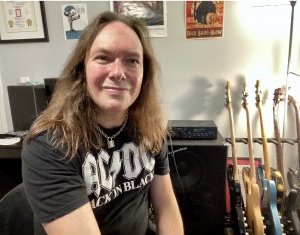 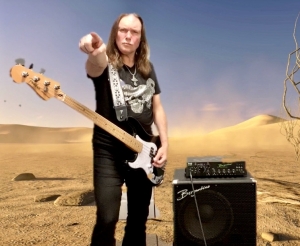 Many may know bass player and Bergantino Artist, Sam Persons. Sam has been on tour with The Rolling Stone Rock Room as the bass player and band leader. During this time, he’s been sharing his amazing pictures on social media chronicling his travels from Amsterdam to Rome.

But his original musical journey begins stateside in Redondo Beach in Los Angeles.

How did your passion for the bass start?

I started playing bass when I was 16 years old. I had a good friend in high school who saw Eddie Van Halen and that was it – he was going to be a guitar player.

He told me, ‘I am going to be a rock star and you better get it together and join me!’

So, we went to a Kiss concert and saw Gene Simmons play. When I observed the reaction he received, I knew I was going to get a bass guitar and be a bass player … and I put a down payment on a bass the very next day.

“I’m a left-handed player … and finding a left-handed bass was not easy!  And it took me a year to actually buy the bass! It was $179.00 and I withheld a lot of school lunches for this bass … and that’s how it started.

“My friend worked at a music store and some of the band would come in and rehearse there. We eventually became roadies for some of the bands such as Great White and Wrath. In fact, one time we came in when the bands were not there and used their gear and got caught by the manager. He told us we sounded great but to never do it again.

“In music, I’ve toured internationally and backed up all types of bands — from Grammy nominees to punk rock kids. I grew up playing the Sunset Strip, in which is was known as the ‘Pay to Play’ era, about the time of Great White, Guns and Roses, Poison and many more. They all cut their teeth and played in front of us.

“I knew some of those guys and used to work for them. We were the next generation of bands … and  I did a lot of ‘Pay to Play’ until the scene died.

Around that time, Stevie Ray Vaughan was killed (in a helicopter crash in 1990), and it seemed every guitar player suddenly wanted to be a blues player. I met up with a legit Chicago blues player Osee Anderson and I switched gears and went on tour for seven years or so with Osee in the U.S., Canada and ultimately back to LA.

“Then I bounced around from band to band. It seemed I was in six bands at a time, and most of it was practicing, not always playing and it became a total burn out. At this time, the price of housing in LA got expensive, so I went to Nashville. Nashville is a great community and it’s very easy to work here … be yourself and be true to who you are … genuine.”

Sam continues about his musical journey, “I recently played with Rick Monroe, who is an American country music artist based in Nashville.  He has released four albums, three EPs and several charted singles.  I played 180 shows last year with Rick.  We spent almost three years we played together. He went from doing country tours with big artists as a tour opener to putting a band together and starting from scratch. He has some great singles that even hit the top 40 last year!  Rick had been my main priority. I try and bring a “west coast edge” to the band.  I was also with a band called Social Poison the bass player, guitar player and vocalist for over nine years.”

How did you learn?

“I had friends that taught me…a friend with a cassette player that you could slow down to half speed. I also used magazines and books – that’s how you learned back then. I’m from the school of hard knocks.”

Who were your Influences?

“I go back to the 70s and being left-handed so Paul McCartney was definitely right there, then players like Geezer Butler, Getty Lee and Chris Squire. I‘ve always been drawn to aggressive players and I emulate that in my playing.”

What are your favorite styles of music to play?

I still love the blues, with a serious blues band that really knows what they are doing. When I moved to Nashville, I went to a blues jam where you can fill-in for someone (and if you are good enough) people will discover you.

“I ended up in a band called the Andy T. Nixon band. He was a guitar player from California and his brother Nick Nixon was a very celebrated singer. He is credited with bringing Jimmy Hendrix to Nashville. He met Jimmy and drummer Billy Cox … and the three of them started turning up all around Nashville.

“Jimmy got fired from almost every band he was in. I was very happy and fortunate to be in the band with him for a couple of years. This led me to play upright, which was a chore, and I knew I needed to do more that.”

How did you find Bergantino?

I had known about Bergantino for a long time. In the last few years, Bergantino has had a big blitz in awareness for your cabs and amps. I have always known your cabs are legendary, and I’ve been looking for an amp and cab company that matched. A matched system is optimal to me and Bergantino is the most transparent I have ever played through … It literally tells me exactly what my instrument sounds like. That’s why I’m with Bergantino. I use the forté and it is perfect for me. I set it flat, decide where I want the input and compressor, and I’m good to go. If I can’t take the cab at a certain place, I always bring the head with me.”

In addition to the Bergantino forté bass amp, Sam said he uses the NV412 cabinet.

Tell me about some of your basses

“My first bass was a precision copy called a Seville, I saved my lunch money for a year to get it.

I am currently partnering with Moonshine Custom guitars on a signature instrument based on my personal favorite pickup combination: correct MM position/correct P position.

“Keep your eyes open because we’re coming up with what I think are some interesting new pickup combinations but I don’t want to give too much away.

“Right now I’m playing two matching Fender P’s with that configuration. I also have a Music Man (same configuration), a Warwick Streamer LX 5 and a Paul Beard Resonator bass, and a Shen lefty upright rounds out the present family.”

What do you enjoy in your spare time?

“I love teaching martial arts. I have been a student for 30 years and a teacher for the last ten years. I have competed in the U.S. and overseas and have won first-place gold medals in various tournaments.

“I have the honor of teaching and learning from some of the last generation of Chinese traditional masters. I always notice how music and martial arts are related. Music takes sacrifice, commitment and you have to give up things that people don’t always understand. Martial arts is a discipline … It takes a long time to learn and master. You never stop learning. And most of the musicians I have known are into martial arts as well.

“I teach tai-chi to seniors (close-in fighting style) and kung fu. Additionally, I instruct on breathing techniques where one learns how to withstand pain. This really slows down the aging process and keeps the body healthy and strong. It’s rewarding when I have the time. At my age, you work on the insides, not punching bags or breaking bricks.