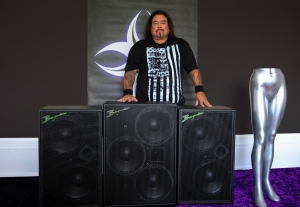 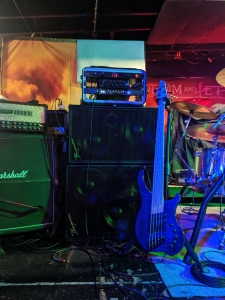 High-end carpenter by day and extreme energy, face-melting bassist by night, Bobby Fernandez started his bass journey 41 years ago and has been going strong ever since!  As a 14-year-old kid, like many, Bobby looked no further for inspiration than KISS.  With their larger-than-life persona, Bobby and his friends were emulating KISS and as luck would have it, they were asked to play and party and the rest is history as his bass journey had begun. When he was 14 years old, his parents rented his first bass guitar.  It was a P-bass except the pick-up was not long enough so you couldn’t hear the G string but he managed to fall in love with the instrument regardless of its shortcomings.

Bobby states, “My parents have always been very supportive of my music. When it came time to purchase a bass, we were near a city called OceanSide and they had a store called Ocean Side Music Supply. That is when I got my first professional bass, a Gibson Ripper. I was sixteen years old. I got it because I saw a picture of Gene Simmons playing it.  Also, Louis Johnson had played a Ripper and they didn’t call him the “Human Rhythm Machine” for nothing! I took three years of lessons and learned the basics. In terms of playing, I emulated the people I liked. I was also influenced by Cheap Trick, Paul McCartney, even Neil Sedaka and Elvis!”

During his high school years, Bobby played a lot of shows but gave up bass for a small time period and found himself unhappy or not fulfilled.  He started playing again, and in doing so, found happiness again. From there things started to grow.  His life changed from doing “crazy and stupid things” to getting serious about his music and career.

Bobby now anchors the low end in a San Diego-based band called “Symbolic”.  Best described as a heavy-hitting dynamic force hailing from power/prog metal midst of the San Diego, California metal music scene. Symbolic combines their melodic energy with the excitement of old school metal mixed with the power and skill of modern metal. Since the inception of the band Symbolic has built a strong fan base both locally and Internationally.

Last year they signed with EMP Label Group. Bobby says, “David Ellefson is a smart guy and fun to talk too. Being associated with the name is a very good thing for Symbolic.”

“I had a chance to play a couple of Bergantino cabinets.  I tried them out at Bass San Diego. My friend, Rob Jones and Rick Gauthier stressed that I should really give them a try. Then, I connected with the Bergantino team at NAMM 2019.  The first time I used the cabinets with my band, they said it was the clearest sounding bass tone they ever heard me play and it sounded amazing!  Being lightweight was also huge bonus! In my band context, I need to find my own frequencies between the two guitar players and the drums. It’s a huge win for me because Bergantino gear makes it so effortless.  They are pure aural perfection that touches ALL your senses!”

Also, of note, Bobby is an endorsed Dingwall artist and can be seen at the Dingwall NAMM booth every year.  Thank you, Bobby, for being an ambassador for Bergantino Audio Systems.  We look forward to many more years of your music!