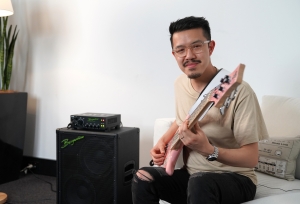 Daniel Sing is a bassist, educator and musical director based in Sydney. Whether he is playing Electric, Upright or Key Bass, he keeps a regular schedule working and teaching in a diverse range of styles.

Daniel attended Western Sydney University, graduating in 2011 with degrees in both Performance and Music Education. He is a highly-accomplished educator and band director, teaching and band directing full-time at Inaburra School in Sydney since 2013.

As a bass player, Daniel has performed and recorded alongside artists such as Deandre Brackensick (American Idol finalist), J Mitch (Grammy-nominated Gospel songwriter and artist), Carl Wheeler, Elan Trotman, as well as many Australian artists spanning a vast range of styles including Pop, Jazz, RnB and Country. He has also held the position of musical director for numerous church Praise & Worship conferences for over a decade in Australia.

Bergantino Gear:  forte’, and the NXT210